December 2, 2022
Are You Talking to Me, God?
Mary Southerland

The Lord answered him, “I will be with you. It will seem as if the Midianites you are fighting are only one man”(Judges 6:16 NCV).

I was born to be an elementary school teacher – period. So, when a total stranger tapped me on the shoulder and said, “While you were singing, God told me that you are supposed to be my Music and Youth Assistant this summer,” I felt sorry for him. He obviously needed to have his hearing checked.

I had just graduated from college with an elementary education teaching degree. A good friend was leading worship for a local church and asked me to sing a solo in the evening service. That’s all – or so I thought.

When the service ended, my good friend introduced me to his good friend, the hard-of-hearing stranger, and said, “You should at least pray about his offer.” I did. And here I am – forty years later – an unlikely servant who lives in constant amazement at God’s plan for her life.

The Bible is filled with men and women who were just like me. Weak, fearful, and unwilling, fighting against the call of God, offering excuses, and pleading for exemption. Gideon was such a man. (Read his story in Judges 6:11-16.)

Gideon was a farmer, a family man trying to earn a living and put food on the table. He felt inadequate to carry out God’s plan for his life. But God saw what Gideon could be, not just what he was.

The fact that the angel called Gideon a “mighty warrior” is just plain funny. Gideon didn’t look or act like a mighty warrior. Normally, wheat was threshed in an open area on a threshing floor by oxen pulling threshing sledges over the stalks.

He did his work in a winepress, hidden from the view of the Midianites. I don’t blame him. The Midianites were basically terrorists - a large and powerful army of nomadic invaders. God wanted Gideon to defeat them and set the Israelites free.

I can imagine the look on Gideon’s face and the panic in his heart when God told him the plan. Gideon’s response was so human and so like my own when God calls me to do something that seems impossible and makes no human sense at all.

Are you talking to me?

You want me to do what? Save who? Now that’s funny!

I don’t think Gideon was being humble. I think he was terrified and convinced he was totally unqualified for the job. I know that feeling. I tend to use my weaknesses as excuses for disobedience instead of accepting them for what they really are, opportunities for God to show up and show off in my life.

God’s commitment to Gideon reaffirmed His presence with Gideon and the ease with which Gideon would have victory over the Midianites.

“The Lord answered him, ‘I will be with you. It will seem as if the Midianites you are fighting are only one man’”(Judges 6:16 NCV).

The literal translation is “as if they were but one man.” I love it!

Here was Gideon, probably the last man anyone would choose to face the Midianites, and God is telling him the victory will be so easy it will seem like he is facing one man instead of an army of fierce invaders.

Gideon’s attitude was lousy. He sputtered every excuse imaginable, venting his anger while questioning the validity of God’s choice. Still, God insisted Gideon was the man for the job.

Making excuses is always a waste of time because God is aware of who we are and what we can and cannot do. When God calls us, He equips and empowers us to obey that calling.

The Lord told Gideon to “go in the strength you have.” God was asking Gideon to step out in faith, knowing his strength would not be enough for the task ahead. Our strength is never enough. That’s what faith is all about.

Faith is a willingness to step out in mid-air, no safety net in sight – trusting God to be there – at the point of our greatest need.

Father, I’m just like Gideon. I’m afraid to step out in faith. I want to trust You, but my faith is weak. I don’t understand how You can love someone like me … and to think that You have a special plan for my life is hard to believe. Help my unbelief, Lord. In Jesus’ Name, Amen.

Is God asking you to step out in faith? What will be your answer today?

More from the Girlfriends 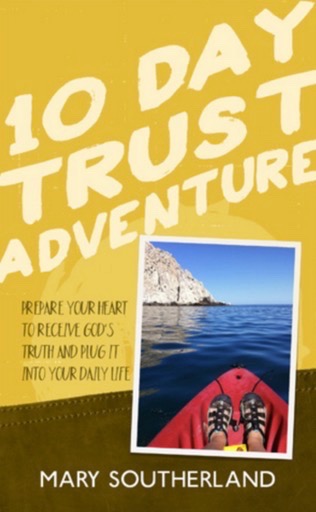 It is sometimes hard to trust God, isn’t it? Mary’s book, 10 Day Trust Adventure, will help you learn how to step out in faith. Check it out!

Need prayer? Email our Prayer Team Director, Ginger Meador. Our prayer team would love to cover you in prayer.

© 2022 by Mary Southerland. All rights reserved.

Not many people know that Girlfriends in God relies solely on the ongoing generosity of friends like you. As a global nonprofit ministry, financial support from sisters all over the world fuels our efforts to produce biblical devotions with the goal of equipping women to apply the gospel to all of life. Would you consider making a small gift, or becoming a monthly partner, to help sustain GiG’s efforts? To make a donation please go to https://girlfriendsingod.com/donate/

Did someone forward this devotional to you? Click here to receive Girlfriends in God weekday devotions delivered directly to your inbox!

This content first appeared on Crosswalk.com and is used here with permission. To view the original visit: https://www.crosswalk.com/devotionals/girlfriends/girlfriends-in-god-december-2-2022.html